When Ford released the replacement to the Escort in 1998 it transformed the image of the company’s car range. The Escort had long been considered a bit of a dog, with dull styling, stodgy handling and a low rent interior. Along came the the Focus with its sharp ‘New Edge’ design, much improved build quality and handling that was a revelation, and proceeded to march straight to the top of the sales charts. 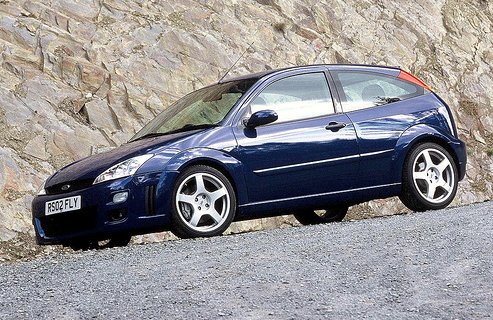 The Focus’ chassis was it’s best point. The sophisticated fully independent multi-link rear suspension (named “Control Blade” by Ford) gave the Focus class-leading handling and ride, and was a big factor in the euphoric reviews given by the motoring press.

From launch the talents of the chassis were barely put to test by even the most powerful engine available, the 130bhp 2.0-litre. Slowly demand grew for something faster, something to capture the spirit of the old Escort XR3i and RS Turbo, and eventually Ford released what was to be the ultimate version, the Ford Focus RS.

The Focus RS was much more than a tuned version of the standard model. Almost 70% of the standard mechanicals were upgraded or replaced and there were some big names providing the new hardware:

With such high profile names behind the scenes the Focus RS was immediately taken seriously as a hot hatch.

You didn’t have to agonise over which colour your Focus RS should be as it was available in one colour only – Imperial Blue, a striking metallic shade that matched the colour used on Ford’s WRC cars at the time.

This was one obvious clue that you weren’t looking at a standard Focus, the other being the wider body, with flared wheelarches covering the wider track and helping to give the car a purposeful stance. To fit the wider wings the RS had unique front and rear bumpers, the front bumper including air vents to assist in brake cooling. A larger roof spoiler was also fitted to finish off the look. 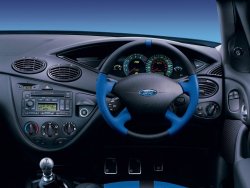 Inside the blue theme continued, with the Sparco seats covered in blue and black leather and Alcantara, as well as the door panels. The instrument display featured blue dials, and to finish things off there was a start button coloured … green. 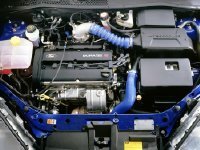 Performance was superb and compared well with it’s rivals at the time. With 212bhp the Focus RS was ahead of other hardcore hatchbacks such as the Civic Type R (197bhp) and Seat Leon Cupra R (210bhp) and on track could equal the performance of more powerful rivals such as the Subaru Impreza. Ford actually states that the 212bhp figure is a ‘minimum’ and according to many owners who’ve tried their RS on a rolling road power output can be as high as 230bhp.

It was on track that the Focus really stood out, with razer sharp steering response and massive grip, and was capable of posting lap times that would embarass more powerful cars. This was partly due to the Focus chassis, but also a benefit of the Quaife differential.

‘The RS clicks with smooth surfaces, slicing razor-sharp from apex to apex, hooking into deeply cambered turns with rock-solid conviction and firing out onto the straights hard and true, all power in harness. It’s superb’ – EVO magazine, October 2002

It was this differential that proved to be the car’s Achilles heel. Road-testers reported that out on the open road the car had a problem with torque steer, a side-effect of the differential struggling to deal with the engine’s mighty torque on poor surfaces. Some rumours suggest that Ford had tweaked the press cars to make them more exciting on track but compromsing its off-track capabilities, while customer cars benefited from a less agressive settings on the differential making them smoother and less prone to torque steer. If these rumours are true then Ford’s tinkering backfired as the motoring press roundly criticised the car for its unruly nature, giving it an unjustified reputation for excessive torque steer.

Luckily this didn’t stop the Focus RS from being a runaway sales success. Production started in October 2002 and was limited to just 4,501 units, of which 2,147 were shipped to the United Kingdom. As soon as they hit the showrooms they were selling fast, and by the time production ended in November 2003 all cars had been spoken for.

Even now, four years after they stopped making the Focus RS, it is very much in demand with second hand values remaining strong. Today, a tidy low mileage example can still fetch as much as £16,000, while examples with over 90,000 miles on the clock are still going for £11,000.

One thing to be aware of us that there was an upgrade to the car midway through production, with cars being unofficially branded ‘phase one’ or ‘phase two’. The phase two cars included an upgraded engine map (coded AF instead of the original AE) that gave better fuel economy, power delivery and starting. Dealers can upgrade AE cars to the AF map, so check to see if the car you’re buying has had it done.

The trick is finding one that hasn’t been tweaked, tuned or thrashed to within an inch of its life on the track. Shop around and you can still find good cars, and if you are lucky enough to get your hands on one then you’re in for a treat.