Peugeot have been a bit behind the game recently, with both the 206 and 307 giving us very little to get excited about. The glory days of the 205 GTi and 306 GTi-6 seem a long way away now, with their replacements being panned for being boring and, even worse, unreliable. However, with the new Peugeot 308 GT there might be a chance that things are back on track again.

Ditching the 2.0-litre lump that was used in the 307, the new 308 GT uses a turbocharged 1.6-litre engine that produces 175bhp. This gives the 308 GT very respectable performance, with 0-62mph taking just 8.3 seconds and the top speed being 140mph. Not bad, considering that the 308 car has put on a few pounds over the old 307, mainly due to improved crash protection. The decreased engine capacity also has a number of advantages – better fuel economy (37.1mpg), which means lower carbon dioxide emissions (180 g/km), which consequently means lower road tax (band E for 2008).

Peugeot have worked hard to improve on the quality of the old 307 and it’s on the inside that you see where most of the effort has been spent. Gone are the harsh plastics of the old car to be replaced by softer touch materials and less brittle plastics, giving an air of quality that was missing in the old car. 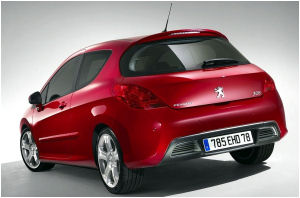 Once you get out onto the road in the 308 GT you start to realise that the THP 175 is a good engine. Throttle response is crisp and it pulls strongly from around 1,600rpm, the turbo generating plenty of torque to hurry the car along. There’s also a bit of character from the exhaust note, which is sporty without being loud, although this is surprising as if you look at the rear of the car there’s no sign of the exhaust at all – the obligatory chrome-tip is missing. The THP 175 also gets a new six-speed gearbox, replacing the horrible five-speed box of the old car. The gearchange is quick and precise and makes the driving experience that much better.

The chassis is also good, with very controlled response over rough UK roads. While it may not have the intimate levels of feedback you’d expect from a true hot hatch, it does make for a very competent companion on a B-road sprint. Where firmer hot hatches might crash and jar across worn tarmac the 308 GT soaks up the bumps quite well, but without feeling too soft. The electric power steering feels a little bit remote, but this is often the case when moving from hydraulic systems.

The big weakness of the Peugeot 308 GT is its price. Having improved the quality of the interior Peugeot seems to think the car has moved upmarket and have adjusted the price to match. You can have a 308 GT for £18,995, which is perilously close to serious hot hatch territory. You can have a SEAT Leon Cupra for £19,505, a Vauxhall Astra VXR for £19,710 or even a base-spec Ford Focus ST for less money at £18,250. All of these cars are faster and much more fun and the 308 GT is a little out of its depth in this company.

Better to think of the 308 GT as an all-rounder with a more relaxed nature that defines the car’s character. If you’re after hot hatch thrills then the 308 GT will disappoint, but if you’re after a reasonably fast hatchback that is family friendly and won’t cost a fortune to run then it is definitely worth a look.