On a cold, windy and damp morning I find myself sitting in the car park at Bruntingthorpe, situated in Leicestershire. I’m here to enjoy a Supercar Driving Experience, a present from my wife for my 30th birthday (she’s the best!). 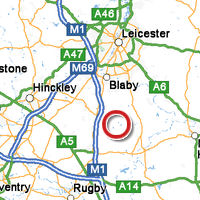 Lined up for my driving pleasure are a variety of sports cars:

The format of the day is to run 3 laps in each car (out lap, fast lap, back in again) around the short circuit of Bruntingthorpe Proving Ground. Bruntingthorpe also acts as an airport and the circuit includes some of the 60m wide runway, giving a chance to pick up some good speed before braking hard for the 90 degree right. Chicanes are positioned at the top corner before the start of the straight, as well as shortly before the end of the straight to bring speeds down before the corner.

Upon arrival there’s a large circular waiting area set up, with signs on the edge of the circle acting as the queueing points for each of the cars on offer. In the centre of the circle is a wide array of motoring exotica – Ferrari 355 and 360, Lamborghini Gallardo and Murcielago, Aston Martin DB7, Mini Cooper, Lotus Elise, Subaru Impreza, Porsche 911 and Boxster, TVR Griffith and 350. 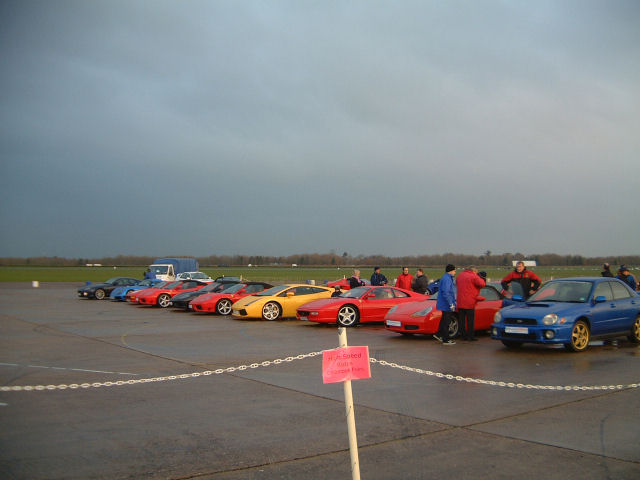 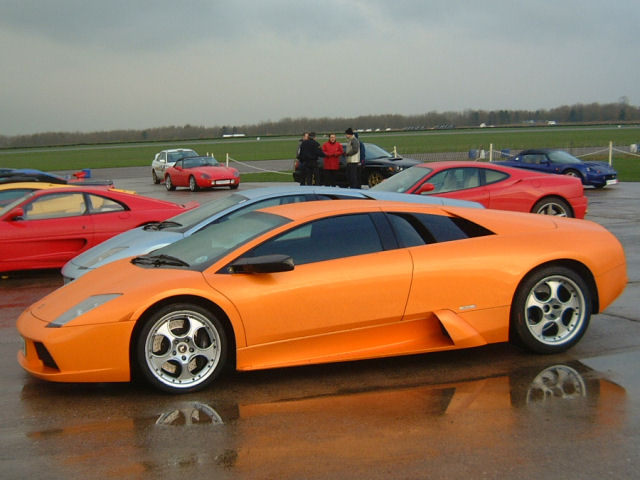 One car of note was a bright orange Lamborghini Murcielago, registration SG54 LAM. I recognised the plate and realised that this was none other than the Fast Fleet Murcielago belonging to Simon George, contributing writer for EVO magazine. One of his methods of covering the extortionate running costs for the Murcie is to run hot passenger laps at track days, and throughout the day I would see his car hurtling at considerable speed around the course.

After half an hour queueing for registration in the freezing wind and drizzly rain, it’s off to the obligatory safety briefing. One safety rule in particular is drilled into all the attending drivers, and that is the ‘spin and in’ rule. None of the cars require you to wear a helmet and so to ‘encourage’ safe driving (and cut down on insurance costs) the rules are that if you spin the car then you have to come straight back into the pits. Considering the cars on offer and the slightly damp track, this definitely has me thinking twice about trying any heroics on track! Personally I’d much rather wear a helmet and have a bit of margin for driver error, but I don’t make the rules.

Before getting out on the track, the first part of the day’s entertainment was Karting. Running around a wet circuit with slick tyres is certainly entertaining, and there were quite a few ‘offs’ onto the grass around the circuit. Great fun! 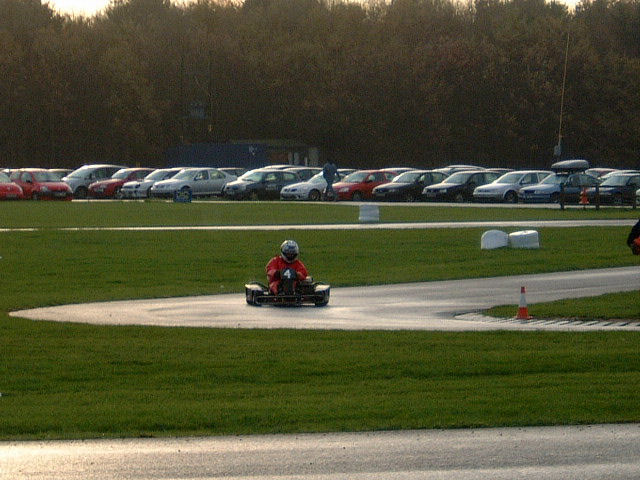 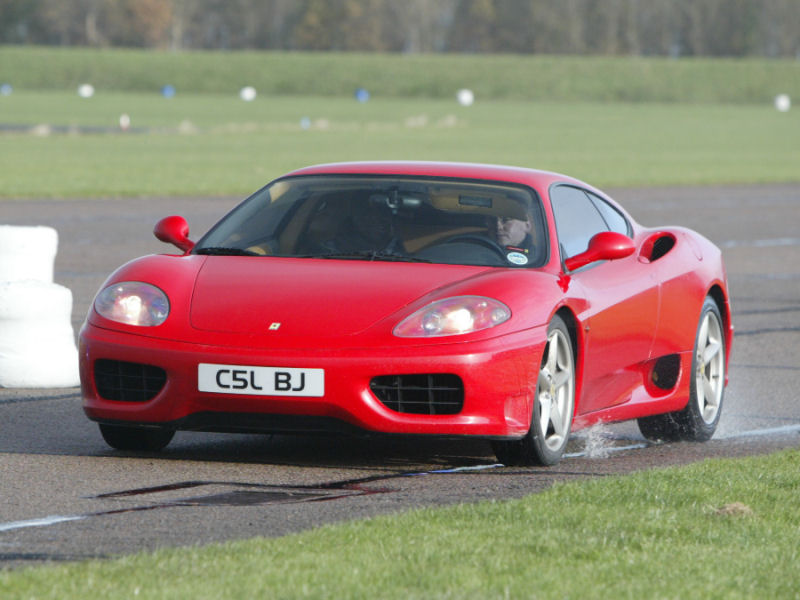 Having finished the carting it was straight onto the first car of the day – the Ferrari 360! The car was a red left-hand drive version with paddle shift gearbox. Sliding into the sumptuous leather seats, you can see the craftsmanship that has gone into the interior and it feels like a very special place to be. I pull back on the paddle and select first then ease out onto the track for the first time.

Straight away the Ferrari feels fast, and the V8 behind me sounds glorious. The paddle shift is simple to use, just like playing on the Playstation, so without a clutch to worry about it makes the Ferrari the perfect car to learn the Bruntingthorpe layout. It’s a shame the Ferrari is my first drive as I feel I spend more time learning the course and cornering lines than fully enjoying the car. 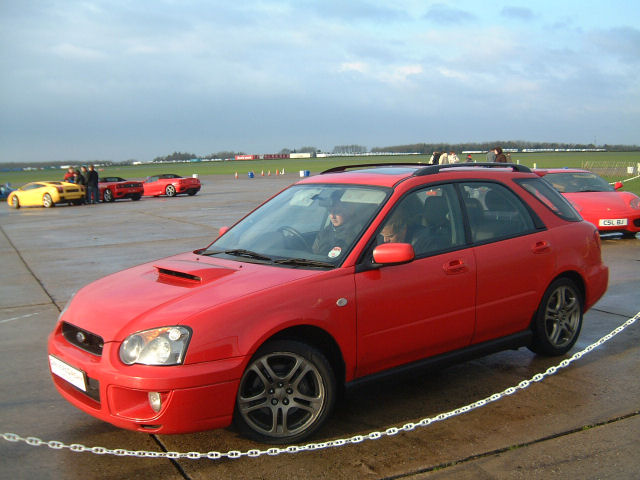 All too soon the three laps are over and I find myself back in the waiting area. No sooner have I stepped out of the Ferrari than I’m climbing into a Subaru Impreza WRX. After the beautiful lines of the 360 , the Impreza is a bit of an ugly duckling and that impression is enforced by this example being an estate. Things don’t improve on the inside, with a black slab of plastic for a dashboard. However, starting up the flat four and hearing that familiar warble soon banishes any worries about how the thing looks.

Despite ‘only’ giving 276bhp, the turbocharged Impreza is a seriously quick car. It’s also really easy to drive with light steering and a smooth gearbox. I quickly gain confidence in the car and start attacking the corners, and on a couple of occasions I can feel the car sliding into a four-wheel drift as I floor the accelerator. It leaves me with a great deal of respect for the Impreza’s abilities. 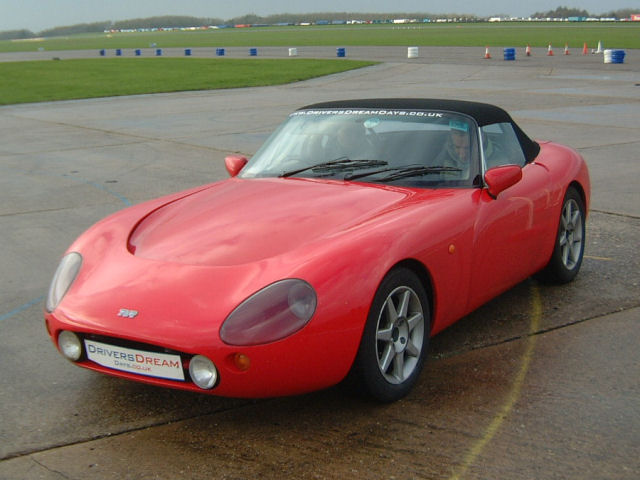 Back in the pits and there’s a TVR Griffith with my name on it. Now, bearing in mind the ‘spin and in’ rule, I’m slightly concerned when I hear the previous driver telling his mate how he spun it on his last lap. No time to worry as I jump in and belt up. It’s a cosy cockpit with a very high transmission tunnel, on top of which sits an aluminium ball at the end of a stubby gearstick. There’s a slight whiff of fuel in the cabin mixed with the smell of the hot engine, and it somehow makes the Griffith feel alive, particularly after the sterile interior of the Impreza.

I turn the key and the 4.0 litre V8 bursts into life. You can feel it reverberating through the entire car, and as I pull away it’s obvious that there’s a lot of grunt to propel this relatively small car. With a lot of throttle travel you can control the amount of power more easily than you might expect but there’s no traction control to reign in the 280bhp and 305 lb/ft of torque, and a couple of times I find the back end starting to slide on the greasy track. A quick stab of opposite lock straightens things up but it certainly quickens the pulse, and I get the impression that this car could bite if not treated with respect! 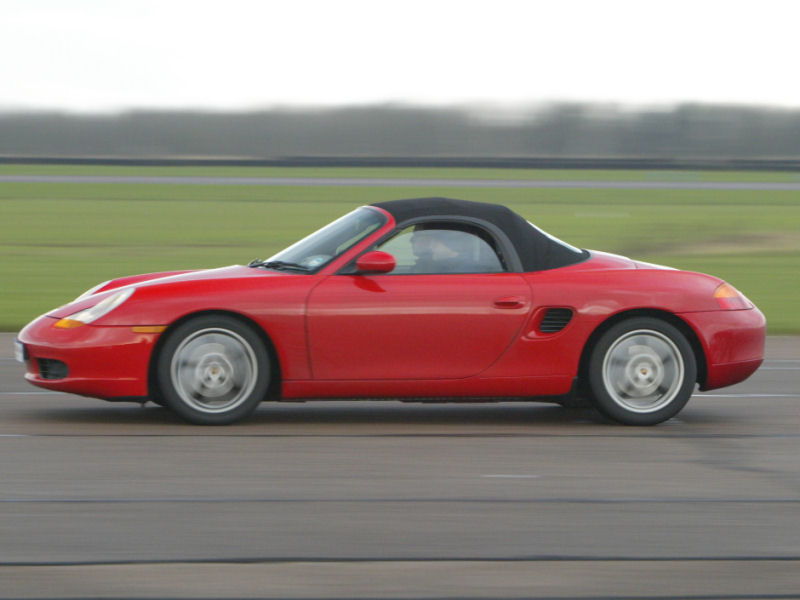 Next car to drive is the Porsche Boxster. I’m slightly disappointed that it’s not a 911, but I’ve read more than enough to know that the Boxster is a great drive in true Porsche fashion. A grey and slightly bland interior does little to stir the soul, but the sound of the flat six behind you certainly does.
Acceleration is strong with a fantastic howl from the boxer engine as it reaches the top end. Traction is good and it feels quick and responsive around the track, with light steering that provides lots of feedback as to what’s happening at the front end. The clutch is also light and the gearshift feels strong and direct. You can tell that there’s precision engineering behind every control.

When I get back to the pits I can’t help but feel that the Boxster is a bit boring, but with hindsight that’s not that the case. I think it has more to do with the fact that it is just so capable, and could easily handle the pace that I was driving at without any fuss at all. 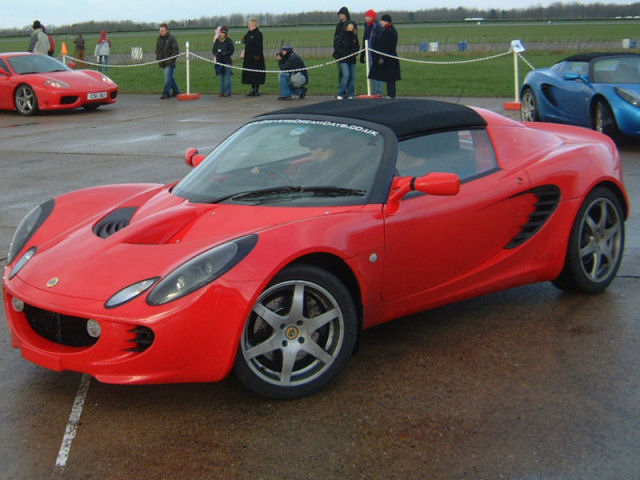 Out of the Porsche and now I’m squeezing into a Lotus Elise. I’ve been a big fan of the Elise ever since it was released in 1996, and it’s one of the few cars I’d consider for a ‘weekend’ toy. I’ve got big expectations having heard all the hype abut how it performs, so it’s going to have to be good!

The Elise sits very low on the tarmac and to the unititated climbing in and out can be a clumsy affair, as I discover as I practically fall into the driver’s seat. This car has an incredibly spartan interior, but it is part of Lotus’ drive to keep weight to a minimum and doesn’t bother me at all.

Another mid-engined roadster like the Boxster, the 1.8 litre Toyota engine buzzes away behind me as I head onto the track. After the fuss-free drive in the Porsche the little Elise feels much more lively, with great feedback coming through the steering and every movement of the car being transmitted through the seat of my pants. Acceleration is very good, considering the Toyota powerplant is the least powerful of the day with ‘only’ 189bhp. It’s a great entertainer, and despite a slightly stubborn gearbox I have a great time throwing the little car around the track, and it more than meets my expectations.

They save the best until last, and finally I get to drive the car I’ve been most excited about. With a 5.0 litre V10 pushing out 493bhp, the Lamborghini Gallardo is a proper supercar with performance to match. Like the Ferrari it has a beautiful leather interior, this time housing some very familiar controls from the Audi parts bin. I’m not saying that’s a bad thing, and it definitely feels like the sort of quality you would expect for £120,000. 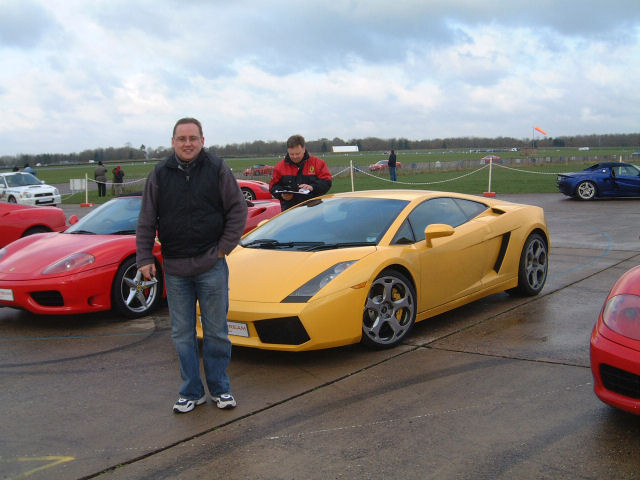 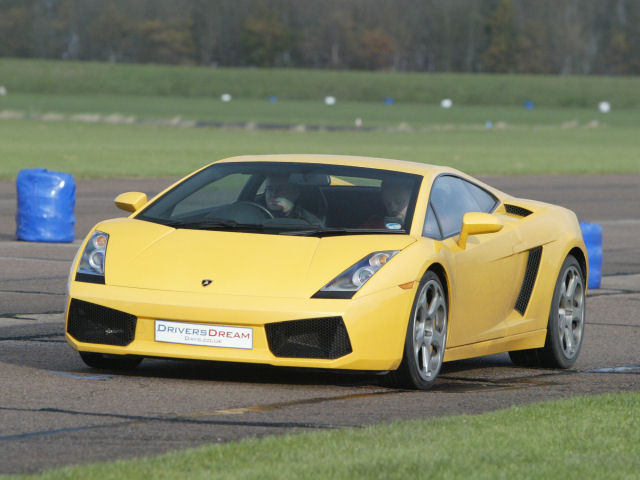 Turning the key sets the starter motor whirring busily before the V10 catches and bursts into life. What a glorious noise, all 10 cylinders firing away right behind you. The clutch is heavy but the gearshift feels good, and I join the traffic on the track. Third gear, full power and …. brutal acceleration combined with an amazing level of noise. Lamborghini vertainly know how to make an engine sound good, this one being a deep, angry bellow rather than the high pitched scream of something like the BMW M5.

Grab fourth and the surge of power and the building crescendo of noise starts again, then I’m braking hard and back into third gear. So it continues, swapping between third and fourth and enjoying the relentless power. The brakes are awesome, the steering meaty and direct, and the cornering abilities far above anything else I’ve driven today. Down the straight on my fast lap I remember to glance down at the speedo and I’m doing 140mph in fourth gear shortly before slamming on the anchors for the right hand turn. All too soon it’s over, and I return to the pits awestruck by the sheer performance of the Gallardo. I know that I’ve come nowhere near the limits of this car, that it could corner faster and brake so much harder than I was asking of it, but I climb out of the car with a massive grin plastered across my face. That is an experience I won’t forget.

So, was the day worth it? I don’t know the exact price as it was a surprise present, but I think the cost was in the region of £350 and was purchased from Drivers Dream Days. That’s a lot of money for a few laps of Bruntingthorpe, but on the other hand how else would I get to drive such a variety of sports cars on my humble salary? I have now driven one of Sant Agata’s finest, and that is almost worth the price of admission on its own!