So Ford have officially unveiled the look of the new Ford Fiesta, due for release later in the year, and I have to say its a big improvement on the outgoing model. The current Fiesta is a safe design, almost as if Ford were afraid to offend the traditional core of buyers, and as such has never really stood out in a crowd. Having been on sale for 32 years the Fiesta has been a steady seller for Ford and is always near the top of the best-sellers list, so you could understand a reluctance to change the formula. 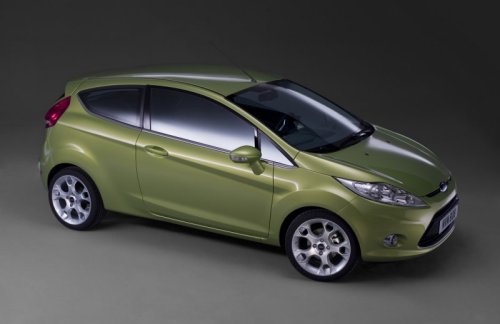 The new model, the sixth generation of the Fiesta, changes that with sleek styling that sticks closely to the looks of last year’s Verve concept. In 3-door form the new Fiesta has a great side profile, with a high waistline rising almost to the roof at the rear. The front features Ford’s new bold grill design, a gaping hole in the front of the car that looks big enough to swallow cats, dogs and small children. Sleek headlights flow back almost to the windscreen, looking very similar to the facelifted Focus, and at the rear are high-mounted light clusters.

In the publicity shots the Fiesta features a slightly bilious shade of green paint, a clue perhaps to some bold colours in the new range. One thing you will notice in the pictures is the very smart alloys, looking like miniature versions of the wheels found on the Focus ST. So will these alloys feature on a low-spec model (unlikely), or are they a clue of what’s to come on the inevitable ST model?

There is little clue of what the ST might have in store when you look at the engine line-up. The most exciting engine is a new 1.6-litre unit that gives 114bhp, up 15bhp on the old unit found in the current Zetec-S. There’s no sign of a hot diesel either, as the old 1.6-litre 89bhp TDCi is continued in the new range.

So what are the options for the new Fiesta ST? The current model’s 150bhp has hardly set the motoring press alight, but it has helped sales with its insurance friendly approach. However, the competition now easily beats the little Ford – the Vauxhall Corsa sports 197bhp, the Mini Cooper S now has 172bhp, the Renaultsport Clio has 197bhp, the Peugeot 207 GTI has 172bhp … the list goes on.

What’s clear is that the new Fiesta ST will need significantly more power to match its rivals, but what unit will provide that power? The 2.0-litre Duratec in the old model has been squeezed to give 185bhp with some clever work by Mountune, but in this day of pricey fuel Ford may well be forced to drop such a thirsty lump. I’m going out on a limb here, but I expect that Ford will follow the trend and go for turbocharging. Sticking a turbo on a smaller engine means more power with the added bonus of lower fuel consumption and emissions, a big selling point in our environmentally paranoid world. I wouldn’t be surprised if we saw a turbo version of the new 1.6-litre unit, giving somewhere in the region of 180bhp. Such a unit would also allow a less powerful version to be slotted into the range, possibly badged up as a Zetec-S, with 150bhp. I’m sure there’ll be some chassis tweaks as well, hopefully keeping the playful nature of the current car.

One feature of the new car that doesn’t bode so well is the new electrically assisted steering, which hopefully won’t ruin the delightfully direct hydraulically assisted steering of the current car. Look for Fiesta ST speculation to increase after the new car’s launch, and expect a release sometime in 2009 after the hype and excitement over the new shape has died down. Pure speculation of course, but if I’m right please allow me to say ‘I told you so!’.